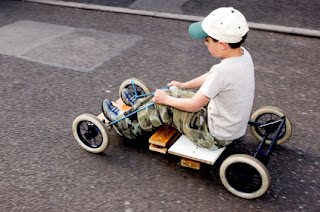 Trolleys: When I was a kid, box-carts were popular. We called them trolleys. We attached wheels salvaged from old prams to planks of wood to make a trolley. Then we stationed our trolley at the top of a slope in the local lane, and, with a gentle push to start, went careering down the slope. Gravitational propulsion can also be exploited in a modern transport system. 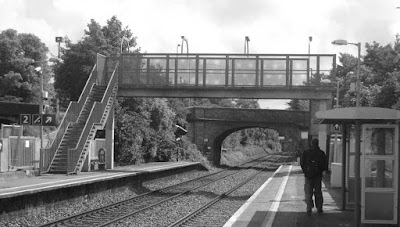 The picture shows a pedestrian bridge (at Castleknock commuter railway station, Dublin). Passengers use this bridge to cross from one platform to the other.

Suppose passengers enter a capsule stationed on the bridge, which then receives a little push sending it down a friction-free slide to commence a journey along the tracks. If the starting point is a mere 26 feet above track level, and the slope of the slide is 45˚, by gravity alone the capsule would reach 30 mph by the time it reached track-level, in around 2 seconds (calculated using the gravitational formulae of math-physics  and the cosine rule).

Sliding through a tube with minimal friction and air-resistance, a little boost every now and then by electro-magnets is all that is required to keep it going at 30 mph forever. 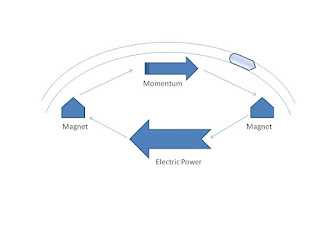 Hill and Dale: Electric power charges an electro-magnet to drive a Capsule up a slope. Coming down the slope, a magnet is used to resist the momentum of the Capsule, slowing the Capsule and generating electric power which is fed back to the system.

Support my blogs by making a small contribution